“Mechanisms involved in the Development, Plasticity and Regeneration of Thalamocortical Circuits”

In sensory systems, the thalamus receives information from peripheral organs which is reliably processed and transmitted to cortical territories for sensory processing as well as for the execution of complex sensory-motor tasks. The development of the thalamocortical wiring requires a precise topographical sorting of its connections. Each thalamic nucleus projects topographically to its corresponding cortical area and corticothalamic feedback is sent back to the corresponding thalamic sensory nuclei. This thalamocortical loop is built at late prenatal-early postnatal stages, and has been demonstrated to be fundamental to regulate developmental processes, for instance, the specification of cortical and thalamic territories (López-Bendito and Molnár, Nat Rev Neurosci., 2003; Leyva-Diaz & López-Bendito, Neuroscience 2013; Garel & López-Bendito, Curr. Opin. Neurob. 2014). The astonishing advances in molecular biology, genetics, imaging, and electrophysiology have led to new evidences and opened novel avenues to understand thalamocortical interactions as processes where intrinsic and extrinsic mechanisms cooperate.

Our research team runs related projects studying the cellular and molecular mechanisms involved in the development, plasticity and regeneration of thalamocortical circuits. In particular, our aim is to uncover the principles underlying axonal wiring, maintenance and ultimately the rewiring of thalamocortical connections, through an integrated and innovative experimental programme.

The thalamocortical circuit development: the importance of corridor cells
In the past decades, a series of studies have been fundamental in advancing our knowledge on the mechanisms involved in the guidance and topographical sorting of the thalamocortical axons.

Although several axon guidance cues have been identified crucial for the navigation of these axons, the modulation of axonal responses by combination of guidance cues remained unclear. In a collaborative previous study, we demonstrated the existence of a neuronal corridor at the subpallium that controls thalamocortical pathfinding (López-Bendito et al., Cell 2006). Importantly, these corridor cells prominently express Slit1 and Netrin1 in a graded manner to set up the topography of thalamocortical axons at the subpallium (Bielle et al., Curr. Biol 2011). We established that Slit1 functions as a rostral repellent that positions intermediate thalamocortical axons but also acts as a dual context-dependent regulator by triggering Netrin 1 attraction in rostral thalamocortical axons (Leyva-Diaz et al., Curr. Biol. 2014). Together, these studies thus provide a novel framework to explain how a limited set of guidance cues can trigger multiple and unexpected axonal behaviors, thereby producing the repertoire of responses necessary for proper wiring of the nervous system.

Figure 1. Topographic ordering of thalamocortical axons by gradients of subpallial cues
(A) Gradients of guidance cues such expressed in the striatum and by corridor cells.
(B) At the corridor cells, Slit1 acts as a rostral repellent to position intermediate axons, and enables Netrin-1 mediated attraction to channel rostral axons to rostral cortical areas.
(Adapted from Garel & López-Bendito Curr. Opin. Neurob. 2014).

Activity-dependent mechanisms for axon growth control
The correct development of brain circuits not only requires axon guidance mechanism but also a precise timing. The time of the formation of the thalamocortical connectivity is partially controlled by intrinsic mechanisms involved in axon growth control. How developing neurons control the speed of axon growth remained unknown. Our work reported on a new mechanism by which spontaneous electrical activity serves as an intrinsic regulator of the growth of thalamocortical axons during brain development (Mire et al., Nat Neurosci 2012;
Castillo-Paterna et al., EMBO Rep. 2015). Manipulating electrical activity is sufficient to modify axon extension in vitro, and silencing this activity delays thalamocortical axon progression in vivo. The regulation of the axon growth velocity in thalamic neurons occurs via activity-dependent regulation of genes, such as Robo1 or Dcc. These observations provided new insights into the mechanisms controlling the timing of axonal extension and have important implications for the understanding of brain wiring.

The role of thalamic calcium waves for sensory systems plasticity
The cerebral cortex is organized into specialized sensory areas, whose initial territory is determined by intracortical molecular determinants. Nevertheless, sensory cortical area size appears to be fine-tuned during development to respond to functional adaptations. For instance, it is well known that congenitally blind humans have a smaller visual cortex and expanded spared cortical areas, such as the somatosensory tactile. Yet, the mechanisms behind these observations were greatly unknown. Last year we showed for the first time a mechanism that adjust the size of primary cortical areas following peripheral input deprivation. By combining calcium imaging, cellular and molecular biology and mouse genetics, we found the existence of spontaneous waves of calcium activity that communicate in the thalamus distinct sensory systems, visual, auditory and somatosensory (Moreno-Juan et al., Nat. Comm. 2017). These waves of information of neural activity maintain sensory systems in homeostasis and allow a normal development of sensory cortical areas. After a peripheral sensory loss, these waves of calcium activity in the thalamus are modified triggering gene expression changes and ultimately changes in cortical areas size, all of which occurs in an experience-independent fashion. 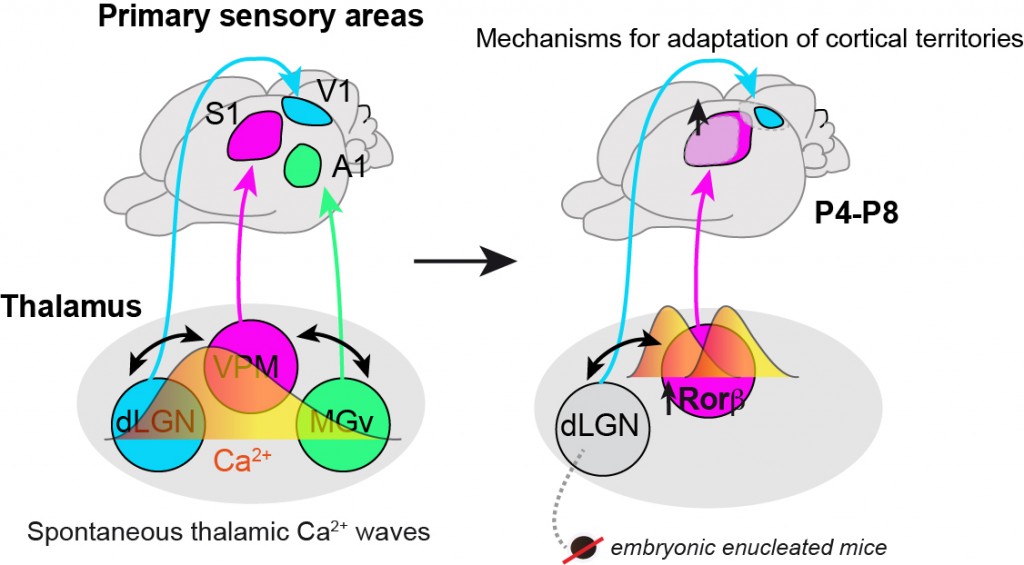 Figure 2. A thalamic mechanism that coordinates sensory cortical areas territories through spontaneous calcium waves. Embryonically visual input deprived mice (embBE) show an expansion of the primary somatosensory cortex (S1) prior to sensory experience. This expansion of the barrel-field is triggered by activity-dependent gene regulation in the somatosensory nucleus of the thalamus. (Adapted from Moreno-Juan et al., Nat. Comm. 2017).

I am extremely pleased to have received the 2018 Joseph Altman Award. This achievement has been possible thanks to the hard-work of past and present members of my laboratory, the full support of my mentors and, of course, the encouragement from my family.